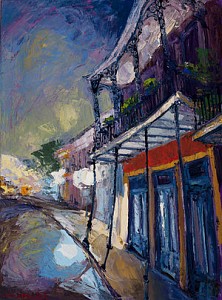 The Essence Beneath: by Bud Brimberg

When James Michalopoulos paints a subject, he peels away the veneer of visible spectrum to reveal the essence beneath. Colors surge and pulsate under the impasto surface; still lifes are anything but. The French countryside erupts into near abstraction. Urban landscapes twist in time but don’t decay; a building isn’t rendered so much as its spirit is revealed. This is more than a painting; it is sculpting light with paint. A Michalopoulos painting is psychohistory in pigment.

In an age of too-cool painting, his art is a reminder of the richer aesthetic that prevailed more than a century ago. Unlike many artists, his defiance of academic fashion is not simply a reaction to what went before. With his dynamic use of color and off-kilter perspective, Michalopoulos makes his images dance with life. This, coupled with an empathy for his subjects, picks up the unfinished business of the Post-Impressionists, perhaps the last school to have incorporated beauty as a necessary ingredient in art.

Michalopoulos started pushing paint around more than thirty years ago. But his aesthetic was formed at an earlier age, growing up with an architect father who designed modernist buildings in traditionbound Connecticut during the Cold War years. Although he studied art at the University of New Orleans and New Orleans Academy of Fine Art and obtained a degree from Bodwin College – his work has no hint of academic pretense. His art is not all irony: it is direct. It is not understated and hidden: and strutting through SoHo: it is palpable, energetic, uniquely envisioned and dripping in elivening hues. It is not ashamed of exuberance; it celebrates it. It does not shy from life: it lives.

As a representational artist, James Michalopoulos is both ahead of his time and behind it; reaching back and forward simultaneously – taking on our twenty first century requirement that every byte be dense with data. His work is both classical and ultramodern. For a generation raised on MTV quick-cuts, his single frame provides multiple channels of information and entertainment. Painting is not an archaic art in his hands. He paints with great craft and without gimmicks, fully engaging even the casual viewer. His subjects are recognizable yet revealed in new forms. He follows the rules of perspective but twists them into a universe even Einstein couldn’t have predicted. One imagines that Michalopoulos sees as his animal subjects see; with a wide sweep, as if his life depends on it too.

A contemporary of Julian Schnabel, David Salle, Eric Fischl and the school of painters who rose to prominence in the 1980s in a revival of the representational image, Michalopoulos infuses his work with depth and intensity rather than devices and covert allegories. Instead of using crockery to build up his surface, he pushes his dense pigment to peaks or presses it into the canvas. He doesn’t proffer inscrutable metaphors: he refreshes the familiar. He didn’t move to an unheated New York garret and await discovery: he developed his vision and metier over an extended period simply by painting and selling his work in New Orleans’ French Quarter. The times caught up with him as objective subjects regained their vogue,

Much as did Monet, Michalopoulos paints what is around him but sees it anew and shares his insights with us. For haystacks, substitute a New Orleans Creole cottage viewed in different light and from altering perspectives. In lieu of a Renoir carriage, think 1958 DeSoto. Compare Cezanne’s tabletop studies with Michalopoulos’ dynamic still lifes brimming with wine and grapes. In all of these instances, the subjects and their treatment parallel the dynamic changes in our society and its changing dynamics. Yet unlike much art created in the span of the intervening century, Michalopoulos’ paintings maintain a critical aesthetic core. Impressionism becomes Expressionism as the observance and transference of life to canvas is informed by the stretch of a hundred years.

Several years after establishing himself in New Orleans and beginning his now-iconic series of architectural paintings, Michalopoulos applied his study of the spiritual life of buildings to other cities. Ranging from the stolid Brahmin structures of Boston to the bold skyscrapers of Chicago and New York, each city’s streetscape is instantly recognizable yet seemingly more palpable than the reality itself. These paintings do what art must do – and rarely does – establish communication with the viewer and energize the sensual experience.

He brings the same approach to his portraits. In their revelations, the compositions are disarming to both viewer and the subject. He sees and shares with us the skepticism, defiance, tenderness, fear, warmth and wonder that his subjects thought they had secreted away. These works share a tradition of “windows of the soul” that began with Rambrandt and can be seen today in the work of Chuck Close. These are more than pictures of people: they are dissections and resurrections of souls lost and found.

Since he began summering in France, Michalopoulos has undertaken a traditional French subject: landscape. He shows us nature as he directly experiences it, and he succeeds in much the same way that the Impressionists did, by revealing light and emotion as reality. These paintings fairly burst off the canvas. Water flows beyond the plane of the picture. Each autumn leaf is perfectly shaded, creating a tree’s mosaic. The sky is sensed in its transparency rather than simply being an elemental excuse to inject some blue tones. There is briskness to these paintings equal to the crisp air one imagines the painter encountered as he worked the canvas.

In similar fashion, Michalopoulos’ still life works are tangible – almost animated. Their highly articulated strokes are closest to the Post-Impressionists, though broader than those employed by Van Gough. They are edgy in the way Cubism is edgy but do not rely on gimmickry or theory to succeed. Their edge derives from the artist’s prismatic vision. He recombines the throbbing color and multiple points of view that he experiences into a single viewing perspective. These are not passive paintings. His grapes demand to be plucked and his wine sampled. Michalopoulos lives fully and lustily. His are not mere dabblings in classic forms for the sake of crafting a more rounded oeuvre. Michalopoulos invites us to dine at his abundant table and share his experiences and friendships with the soul of our eyes.

Not too long ago, art critics dismissed anything they could recognize as “mere illustration”; it being thought that objectivity had been fully explored and, in any case, the camera could do it better. For a period when critics and artists alike were breathlessly chasing Picasso’s shadow, the style dictated that if one could comprehend it, it must not be art. As a result, people became wary of anything viscerally appealing, or worse, popular. If your friends could simply enjoy the paintings you collected without elaborate interpretation, how would they marvel at your erudition? The result was a population afraid to explore art or trust their instincts in its collection.

Michalopoulos collectors avoid this mindset. They connect with the art, embrace it, are embraced by it and want to live with it. Their reward is both intangible in their aesthetic joy, and as the artist’s reputation has grown, tangibly invested with a valuable possession.

Until the Second World War, art movements primarily originated in Western Europe. Europe had a centuries-deep tradition of nurturing art and architecture. Gaze around man-made America, and with the exception of small sections of a few key older cities, New Orleans among them, we have wrought a sterile, facile, inefficient, selfish environment. How is it possible that a great aesthetic could spring from so barren a womb? In fact it hasn’t. What has happened is that as humanity became more distanced from its essence, American art was suitably emblematic of the isolation and alienation felt globally. It reflected people’s outlook and played against its fears. In the slow grind of this transformation, we lost touch with the potential for beauty and exuberance in art. These concepts no longer paralleled our experience.

The debate about a “universal aesthetic” has raged for decades. A collector willing to pay five figures and more for a rock with hair seems to argue against its existence, or even that aesthetics are irrelevant to modern man. A century ago, society would have said the Fauves were proof against the universal aesthetic. These instances of artists feeling trapped in modes of expression preceding them do not mean a universal aesthetic, I.e. a sense of what is beautiful, does not exist or is not necessary. The tumult following the Fauves led to the creation of some of the most beautiful art the world has ever seen. While not instantaneously or universally recognized upon creation as such, the work was acclaimed shortly thereafter.

Is aesthetic necessary to a full life? No doubt. Is art the proper vessel for conveying aesthetic into life? Of course – a proposition proven by our calling prosaic objects “art” when they achieve a higher plane. Are Michalopoulos’ paintings beautiful? I argue that they are – and purposely so – as well as content and emotion rich. But de gustibus et non disputandum est – there’s no accounting for taste. You must judge for yourself. This book provides the material one needs to do so and I think forcefully leads to an affirmative conclusion.

Perhaps we’ve moved beyond the merely beautiful (Renoir, Sargent) through the essential, (Matisse) past the experimental (Gris) into the revealing (Picasso), beyond the decorative (Delaunay, Pollack) over the absurd (Warhol, Koons) to a synthesis of all these in Michalopoulos. The concept of the painting as a window on the world, practiced since the Renaissance and abandoned by the Impressionists, has been reconciled with the concept of the sanctity of the artist’s expression championed by them. Perhaps contribution to the art world is the rapprochement of the window with the artist’s expressionistic canvas.

This volume contains a depth of the artist’s work that will allow you to participate in a robust dialogue with Michalopoulos and his subjects. If this is your first encounter with his work, I envy you the thrill of discovery you’re about to experience. If you are already familiar with his work, the extent and invention of it will likely still amaze. And if you are intimate with the breadth of this output, then this book will allow you to know yourself better as a collector and connoisseur of painting. Revel in it!