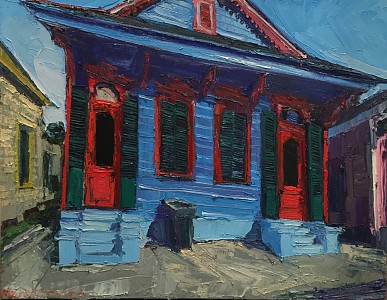 by Bradley Sumrall • Curator of the Collection, Ogden Museum of Southern Art

Certain places in this world are forever tied in the mind of the viewer to the artists that depicted them, as if the spirit of the location is part of the artist, and the spirit of the artist is imbued into the very fabric of the landscape. The memory of the setting becomes an amalgam of the physical reality and the artist’s interpretation. In my mind, the New Mexican desert and the paintings of Georgia O’Keefe are deeply tangled. I can’t think of Horn Island without conjuring the watercolors of Walter Anderson. Throughout her history, the Muse of New Orleans has possessed the hearts of many artists and poets—from the Woodward Brothers to Willie Birch, from Tennessee Williams to Andrei Codrescu. As for today, there is perhaps no living artist more deeply tied in the mind of the public to the visual landscape of New Orleans than James Michalopoulos.

Michalopoulos is the son of a Greek immigrant, Demetrius Anastasiou Michalopoulos, who came to America alone at the age of nine. As was a common practice at the time, his name was changed to James Mitchell. After graduating from Carnegie Institute of Technology and Columbia University, he established himself as a prominent modern architect in Pittsburgh in the 1940’s and 1950’s. He and his partner Dahlen K. Ritchey redesigned much of its downtown, including Mellon Square, John J. Kane Memorial Hospital and the Civic Auditorium (Civic Arena).1

James’ early life was spent in a home surrounded by the works of his father and the paintings of his uncle, renowned surrealistic painter, William Baziotes. These are details worth noting, considering Michalopoulos’ long career as a painter and his life-long fascination with architecture, both historic and vernacular. At first he did not seem likely to follow in the footsteps of either his father or uncle. After graduating from Bowdoin College in 1974 with a degree in Political Science he ran the Boston Food Cooperative for six years before co-founding the Cambridge Cooperative. In 1981 he came to visit New Orleans and—like many before him—the city offered the young man a place to invent himself. He soon embraced the life of an artist, and reclaimed his Greek name, Michalopoulos.

In New Orleans, Michalopoulos became involved in what he describes as “the last vestige of hippie bohemian culture” in America. He frequented the cafes where artists and poets gathered—places like Until Waiting Fills, Café Brazil and La Marquis. He watched the street artists and began painting portraits that he would sell for a few dollars on Pirate’s Alley and Edison Park on Bourbon Street. During this time he turned his attention to the architecture and urban landscape of the older sections of New Orleans—the French Quarter, Marigny, Bywater and the Lower Ninth Ward. Loading his Vespa with a portable easel, paints and a radio forever tuned to WWOZ, Michalopoulos would set up his mobile studio in front of the Creole cottages, townhouses, and shotguns that populate those historic neighborhoods. As he painted, he allowed himself to be open to the city. The whole city informed his work—the visuals, the smells, the sounds, the rhythm. This openness is perhaps the most important element of his process; it allowed him to develop a style that depicts the essence of a particular place and time.

In 1836, the father of American Transcendentalism, Ralph Waldo Emerson, described a perfect state of being in his essay, Nature. Emerson offered that man should seek the divine through taking himself in solitude to nature, and there allow himself to be wholly open and aware in his surroundings. “Standing on the bare ground—my head bathed by the blithe air and uplifted into infinite space—all mean egotism vanishes. I become a transparent eyeball; I am nothing; I see all; the currents of the Universal Being circulate through me; I am part or parcel of God.”2 Just as Emerson communed with his muse, nature, by allowing himself to be objectively open to the entire experience, Michalopoulos developed his style on the streets of New Orleans through a spiritual engagement with place. By immersing himself in the moment—light slanting through thick humid air, leaning buildings drenched in Caribbean color, the heady smell of sweet white flowers and urban decay, the sound of a distant brass band—he arrives at an emotional understanding of the scene. With a confident hand and intuitive approach, he builds the surface of his canvases with bravura knife work, creating a heavy impasto of saturated color and movement. The result is a painting that we feel before we analyze, a painting that is more spirit than structure.

Since ancient Greece, music and the visual arts have been heavily intertwined. Whether through sound or color, both the composer and the artist engage rhythm and harmony to evoke emotion. Wassily Kandinsky describes this connection clearly: “Color is a means of exerting direct influence on the soul. Color is the keyboard, the eyes are the hammers, the soul is the piano with many strings. The artist is the hands which play, touching one key or another purposively to cause vibrations in the Soul.”3 Like almost everything in New Orleans, Michalopoulos’ painting practice is usually accompanied by music, be it from the speakers of his radio or spilling from the doorway of a jazz club. He is not only aware of the musical nature of his colors and composition, but he also allows the music around him to engage his process. Painting becomes performative, and he waltzes his muse across every canvas.

The vast majority of work by Michalopoulos over the past thirty years has been paintings which depict the streets of New Orleans—her houses and people, and her ever-present cars. Yet the artist is open to experimentation, and never limits the scope of his vision. There is a series of still life paintings with a heavy emphasis on cocktails—fitting considering his second life as a rum distiller. His sculptures range from whimsical cardboard fire hydrants and wooden houses to massive abstract metal studies of color and movement. There is a series of dog paintings, as well as a series of fish. There are clowns, and a series of narrative paintings with a medical theme. Nothing is off limits. This exhibition includes two of his strongest areas of production outside of his depictions of the urban environment: portraiture and French landscapes.

Since the invention of the camera, portrait painting has concerned itself more with inner truth than outer appearance, attempting to reveal something hidden from a lens. Through color, line and composition, the artist attempts to reveal personality. Just as his paintings of the urban landscape of New Orleans portray the essence of the moment, the portraits of Michalopoulos often depict the psychological and emotional essence of his subjects. When portraying a single subject, as in Not a Scintilla or Last Day for the Do, his subjects often seem vulnerable, as if a secret is on the verge of being revealed. These works are less narrative and more a distillation of the artist’s perception of personality. Narrative easily emerges, though, when the subject is situated in a scene (notice the tough confidence of the guitar player in Memgrowl), or when two or three subjects occupy the same canvas (as in the complicated relationships portrayed in Triabolical). In the commissioned portraits of musicians for the New Orleans Jazz and Heritage Festival, Michalopoulos combines the personality of the subject and the timbre of their music with the narrative of place in which they are situated.

For 25 years, Michalopoulos has painted and exhibited in Europe. Falling in love with the Mâconnais district in southern Burgundy, he bought a chateau in the small mountain village of Montagny-sur-Grosne. In the French countryside, Michalopoulos has become possessed by a more traditional muse—nature. His depiction of the French landscape is more abstracted, with a loose gesture and a strong focus on light and movement. In paintings such as Water Show, evanescent light and viscous pools of water frame sculptural trees in ebullient colors to form a dreamlike vision of nature, like a modernist interpretation of a Martin Johnson Heade landscape. Repeated gestures reference the repetitive forms of nature—as his circular marks of color speak of the vortex, the nautilus, the universe. With these works, we see with even greater clarity his layered, scraped and confident handling of paint.

Waltzing the Muse brings together over sixty works to weave the narrative of Michalapoulos’ life with paint. It is the story of a thirty year relationship with the city of New Orleans, and a wild affair with the French landscape. It is an exploration of the human psyche. It shows the artist as a master colorist and an accomplished knife painter. Keeping in mind that he considers painting a “spiritual endeavor,” this exhibition attempts to reveal James Michalopoulos as an artist open to the world, possessed by the muse, and with a will toward transcendence.