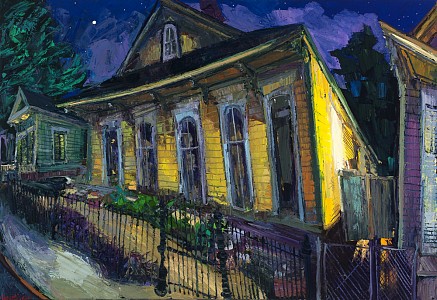 Architecture in Art: by John H. Stubbs • Preservationist and Educator,

Architecture has been considered ‘Mother of the Arts’ and its reinterpretation in paintings lends itself to different ideas and media which are reflective of their times.

How architecture is portrayed forces choices ranging from precise renditions of the built or imaginary to the impressionistic. The architectural paintings of James Michalopoulos boldly represent this latter approach. They imaginatively capture the time and character of his subject buildings and places. His dramatically distorted perspectives of normally static structures are rhetorical; they evoke wonder and give his subjects a sense of energy and movement. His imaginative distortions of the real take into account the key architectural design considerations of balance, rhythm, light, shade and shadow. His building portraits reveal his abilities as an artist and his knowledge of architecture and how it works. Michalopoulos’ exuberant paintings actually celebrate such features. The same may be said for his other work including his portraits, landscapes, animals and still-lifes.

As the son of an architect, James Michalopoulos likely thinks and sees in architectural terms more than others. Even in his deliberate distortions of building appearances he underscores their essence with certain concern for proportion, balance, rhythm and detail. He sees things anew. His building portraits are expressive, reflecting his own term ‘brute expression’. As New Orleans icon Bud Brimberg has observed, Michalopoulos “refreshes the familiar.”

In his work James Michalopoulos thoroughly explores the outstanding authentic variety of New Orleans’s built environment. Historic architecture is the city’s brand and he has mined its rich veins for nearly four decades. He captures the Creole nature of New Orleans historic architecture through his colorful, lush and ethereal impressions, all in lively hues. His plein air paintings of buildings on the streets of the French Quarter, the down River districts and Uptown all reflect the city’s distinct urban vernacular architecture. His oeuvre extends beyond the faubourgs of New Orleans with some of his best other work being buildings and streetscapes in Boston and rural Burgundy, France.

Michalopoulos’ lively portrayals of New Orleans buildings and streetscapes in their settings make all seem familiar when they may not be. He loves the small cottage and low-rise residences of the city’s numerous historic districts. He boldly accents the coloration and play of light that enliven most of the city’s buildings. One senses in his exuberant paintings the nurturing qualities of our older neighborhoods both in its tropical light and at night. Nocturnal depictions of architecture pose a particular challenge, and his efforts in this context are a delight.

James Michalopoulos’ enthusiasm for the city’s vernacular architecture has made him an ambassador of sorts for its historic preservation. The distinct historic urban landscape of New Orleans has not always been appreciated in the way that it is now, particularly the forgotten neighborhoods of the Marigny, Bywater, 9th Ward and Gentilly. Since moving to Louisiana in 1981 he has painted the shotgun houses and cottages in these neighborhoods. His work has come to represent the city on a national level. Given the number of brightly painted houses in these neighborhoods today, one could argue that the city has come to reflect the art, as much as the art reflects the city. In one way the houses are now as exuberant as the paintings always have been, and these neighborhoods are treasured as never before.

James Michalopoulos has empathy with his subjects in ways that engage the viewer with the artist’s eye. In doing so one senses the joy he must have in choosing and composing the perspective, light and backgrounds of his pictures. The joy continues through his color mixing, skillful brushwork and knife-applied impasto through to the finishing touches. His work makes one interested in the artist as a person.

Working artist’s studios tell much of their owners, as they reflect the minds of rare, especially creative minds. A tour of the Michalopoulos studio in Faubourg Marigny, which is located in a sprawling building that was the former Schoen funeral home, says it all. His experimentations with other media—serigraphy, metal sculpture, furniture, mosaics, drawings, prints and study models—reveal his curious, yet confident, search for expression. Seen together in its rambling cavernous volumes the Michalopoulos workspace is sublime beyond description.

It is easy to see why his work is widely admired. His paintings of architecture and other works are distinctive. They impress and they inspire.