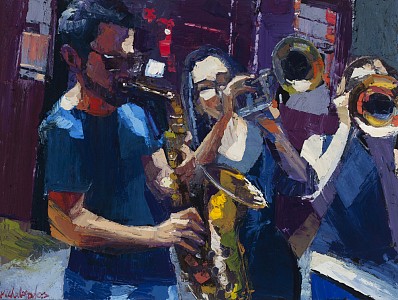 Since its founding, New Orleans has grown as an unusually cosmopolitan place. Its diversity today can be seen in the many distinct neighborhoods from the Riverbend to the Ninth Ward; from Gentilly to the French Quarter—people in exotic combinations, often in exotic costumes, everywhere at all hours; speaking in accents that have marinated together over time and from all corners. It’s a place where immigrant populations from Europe, Africa and the Islands intermingled with native peoples to create a truly heterogeneous community. Rich with ethnicity, but equally rich with a hybrid culture, New Orleans vibrates as an intensely alive and fascinating place.

New Orleans, then, becomes the inevitable setting—in fact, the only possible home—for a protean talent like James Michalopoulos: painter, sculptor, and entrepreneur. His paintings of the city, its architecture, and its residents have led to a public perception of him as the iconic New Orleans artist. Further, his Old New Orleans Rum, made by the liquor company that he owns, Celebration Distillation, has come to represent the city just as his paintings have.

In keeping with the hybrid quality of New Orleanians, Michalopoulos is not a native. Born in Pittsburgh and educated at Bowdoin College in Brunswick, Maine, he came to New Orleans in 1981. Anyone familiar with airy, crisp, tranquil Brunswick will understand what a leap this move to the muggy, decadent Crescent City really was. He says it was “on a lark.”

Perhaps the exotic strangeness of New Orleans, its coquettish beauty and stunning originality, captured his imagination and his heart. He settled there before settling on something to do. He spent some time getting to know his surroundings, engaging with every aspect of the city’s life: the extraordinary variety of architecture, the street and neighborhood life, the food and drink, the music and art.

One of the hallmarks of his art is its obvious engagement with his subjects. And like his subjects, his paintings are colorful, playful, and odd. He is principally self-taught, though he has taken courses at the New Orleans Academy of Fine Arts and the University of New Orleans. An advocate of lifelong learning, he continues to study on his own. But the first influence he felt—that of the street painters around the French Quarter—is telling, and it can still be seen in the vitality and the syncopation of his mature work.

He made his own start as a street artist, composing quick sketch portraits; but tired of chasing his subjects down, he turned instead to something stationary–New Orleans’ neighborhoods and specifically its domestic architecture. His meanderings through the Ninth Ward, Bywater, Marigny, Mid City, Central City, Garden District and Algiers Point—often late at night on a Vespa scooter—in search of interesting architectural subjects led to the creation of a singular body of work that he has invested with personality, color, rhythm, and movement.

Michalopoulos’ paintings are instantly recognizable: they are rich with color and texture. He prefers to work with a palette knife, and they are often painted on a grand scale. His playful renderings of New Orleans buildings and casual depictions of the city’s denizens are so well known that people who don’t even know his name know his art. He’s also known for the highly collectible posters that he’s created for the Jazz and Heritage Festival. He’s been selected to create the festival’s poster six times, more than any other artist.

A less well known, though equally impressive, aspect of his art are his sculptures, tall metal and wood fantasies reaching colorfully up into the sky. In 2012 his creation of a large scale abstract sculpture, Mother Cluster, and its installation in the public sculpture garden on Veterans Memorial Boulevard, has brought even more attention to his overflowing portfolio.

Inspired by his adopted hometown, James Michalopoulos continues to make art that is fresh, vital, and captivating. He has succeeded in capturing the piquant nature of that city in work that is as vibrant and expressive as it is accessible.