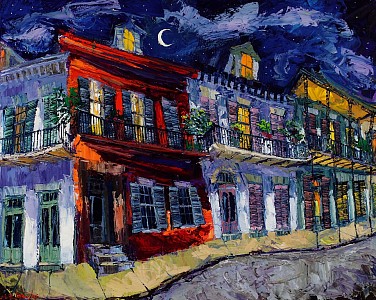 At the time of this writing we are approaching the year 2000. For a brief portion of that time the United States has struggled to define its place in the art world—taking the Western European tradition that overshadowed our early formation and adding the Eastern, Caribbean, African and Native influences present in our culture today. Fashion and context cycled Romantic, Minimalist, Primitive and Naturalistic movements in and out of favor in various combinations.

With 200 years of growth and evolution behind us, many art forms are now loved in the United States. One genre is appreciated for color or space division, another for style, a third for satire or emotion—none in exclusivity. Fashion no longer rules. No one is afraid to express appreciation for draftsmanship and restraint of form, by turn. In this refreshing maturity of thought and emotion exists a stage for melding fo the familiar into the new.

It is in just such a context that we find the work of James Michalopoulas. His preferred medium is oil, ancient and revered. The drawing style is Giacometti meets Raphael, with a stealthy nod to Thomas Hart Benton. Texture comes from the Fauvists or, perhaps, Van Gogh on a particularly altered day. Color comes from God and the Devil and the Dance of the Hours. The result defies categorization, not said as hyperbole but rather a frustrating reality for gallery owners trying to explain the style to their patrons. What can they say? What do they Say? You’ve just got to see this work.

That’s what it comes down to. A string of adjectives hits you as you scan the canvasses. Visual. Emotional. Complex. Raw. Subtle. Absurd. Divine. As I try to narrow down the verbiage, the best I come up with is a dichotomy: instantly accessible profundity. Translating the visual into words assumes an inherent amount of difficulty. As you currently hold a book containing an excellent assortment of Michalopoulos color plates, it may be more rewarding to leave the visual analysis to your mind and heart.

For many patrons a Michalopoulos represents their first acquisition of a work of fine art. What is the common attraction? Is it the echo of collective consciousness, a flash of recognition in the toothy grin of a classic Detroit Grill? The comfort and invested personality of a building that has compromised with the old adversary, gravity? The secrets revealed by indirect light and the trust of a lover? Content does indeed seem to be the hook that firsts attracts one to a Michalopoulos painting, but finally, it is his insight into the content that engages us. Certainly the color, compositions, light theory, and gesture are there from the beginning, but with time they further unfold, to the delight of the viewer.

The typical Michalopoulos patron is far from typical. From plumbers and physicians to movie stars and strippers, the appeal of the work shows no class consciousness. I’ve been fascinated by the connection James’ work makes with the most unlikely characters. It’s indicative of the depth of these works that they reach across boundaries to provoke emotion, remembrance and admiration.

Years before I actually met James I often observed him, early in his career, painting on the street. Bourbon Street. Just outside of Hoolihan’s, now a ubiquitous strip joint. A most unlikely context for the creation of art, or so I thought.

I would watch from across the street for an hour or more as a steady stream of drunken and dazed but mostly happy people paraded by. Yelled comments were not uncommon, curious well-meaning interrogations a constant. Still the palette knife would flash, and the barest cartoon of a Vieux Carre house would become a study in shadow, light and perspective before my eyes.

The contrast of the temporal street festivity with this creation of enduring art was fascinating. It became apparent over the years that the pulse of this Bacchanalia was echoed in James’ paintings. Certainly it provided some part of the joie de vivre that is as evident in a Michalopoulos as the spirit of the café and cabaret exuding from a Lautrec.

When two in the morning rolled around, the palette and knives found their place in a rolling card, and James’ solitary figure wound through the Quarter. Looking back, I can see that I was granted a unique view of the formative context of a style that would come to be loved by many.

In the early 1990’s James became enamored with the craft and art of serigraphy, and set about in his typical studious manner to absorb every text extant on the subject. When we first met, his eyes widened to learn that I provided consulting services to the commercial screenprint industry. Despite my best efforts over the next several months to introduce him to the latest techniques available for color separation and printing, he continued to gravitate toward the time-honored methods.

Thank goodness for his integrity and craftsmanship. The result is a series of beautifully produced serigraphs with dozens of individually pulled color runs building saturated color and texture. Quite apart from their richness of image, the Michalopoulos serigraph atelier today produces prints of outstanding technique and quality. As an increasing number of collectors become more sophisticated in their appreciation of the serigraphic process, Michalopoulos prints have gained an audience for their quality interpretation of a popular, but often poorly executed, medium.

A visit to James’ working gallery in the Faubourg Marigny section of New Orleans reveals an additional outgrowth of the love of architecture evident in his paintings. Housed in a former brewery warehouse, the studio is a three-story torrent of seemingly impossible angles, architectural artifacts, mosaics and murals interspersed with shelves stuffed with books on art, architecture and printmaking. A soaring staircase ascends to a rooftop garden studio where late night painting sessions occur amid wild electrical storms and blasts from the horns of freighters on the Mississippi, three blocks away. Background music is provided by the vibrant nightlife of Frenchmen Street. It’s a fitting context for the work currently being produced by James Michalopoulos.

As Michalopoulos has refined and developed his work, recognition has grown around the globe. Successful exhibitions in France, Germany, England and Switzerland, and increased representation across the United States, have produced a strong current of collectors and admirers.

The color plates on the follow pages are an excellent introduction to the work of James Michalopoulos. You can certainly get an inkling of the images that affect collectors worldwide so strongly. If I may, however, I suggest seeking out a gallery featuring the works of Michalopoulos. Better yet, visit the New Orleans of Boston gallery. That’s the bottom line: you’ve just got to see this work.