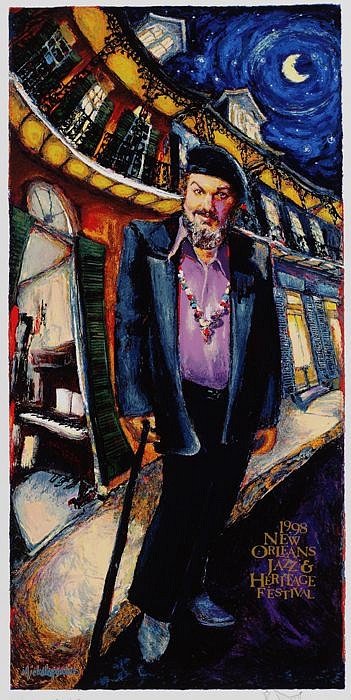 Malcolm John Rebennack, Jr. (better known by his stage name, Dr. John, The Night Tripper) was a singer and songwriter, who is celebrated as one of the main ambassadors of New Orleans funk.

Dr. John started his career in the late 50s, playing gigs around New Orleans and the region. In the 60s and 70s he gained a reputation as a talented session musician, and was part of the famous “Wrecking Crew” in Los Angeles. He played on the Sonny & Cher show, and with numerous musicians such as Eric Clapton, Mick Jagger, Canned Heat and Frank Zappa.

He developed his Dr. John persona in the late 60’s, based on a voodoo conjure man from Senegal who had lived a flamboyant life in New Orleans in the 19th century.

His debut album in 1968 called Gris-Gris, combined New Orleans R&B with psychedelic rock, and him as a unique interpreter of the New Orleans sound. His seminal 1973 album, In the Right Place, produced by Allen Toussaint and featuring The Meters, included two Billboard top 100 singles–In the Right Place, and Such a Night.

His songs have been featured in countless television commercials, shows and movies, and he has performed in festivals and performances all over the world. In 2011 he was inducted in the the Rock & Roll Hall of Fame. He was the winner of six Grammy Awards. 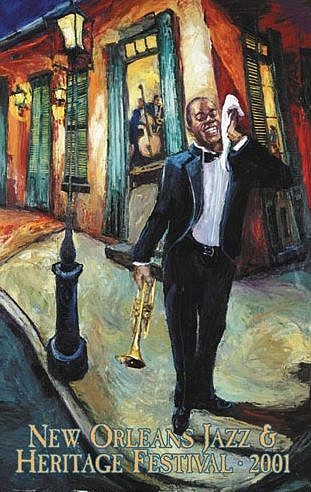 Nicknamed "Satchmo," "Pops" and, later, "Ambassador Satch," Louis Armstrong transformed jazz with his improvised trumpet solos and unique vocals. Along with his bands, the Hot Five and Hot Seven, he released some of the most influential records in jazz history. His career lasted 5 decades, from the 1920's to the 1960's.

A New Orleans native. Armstrong grew up in a neighborhood so dangerous it was known as "The Battlefield". He dropped out of school in the fifth grade, and–after being arrested–was sent at age 11 to the Colored Waif's Home for Boys. Despite this inauspicious beginning, he went on to learn how to play the cornet, and earned the notice of Joe "King" Oliver, who invited Armstrong to join his band, both in New Orleans and Chicago. Between 1925-1928 Armstrong and his band released more than 60 records.

By the end of the decade, the popularity of the Hot Fives and Seven bands was enough to send Armstrong back to New York, where he appeared in the popular Broadway revue, "Hot Chocolates," which launched his acting career. He become the first African American to star in a Hollywood film and went on to star in such iconic films as High Society and Pennies from Heaven–both with Bing Crosby, and New Orleans with Billie Holliday.

Throughout his long career he performed and recorded with the jazz greats of the era, including Fletcher Henderson and His Orchestra, Bix Beiderbecke, Bing Crosby, Duke Ellington, Earl Hines, Jimmie Rogers, Bessie Smith and Ella Fitzgerald. He toured extensively, and in 2017, was inducted into the Rhythm & Blues Hall of Fame. 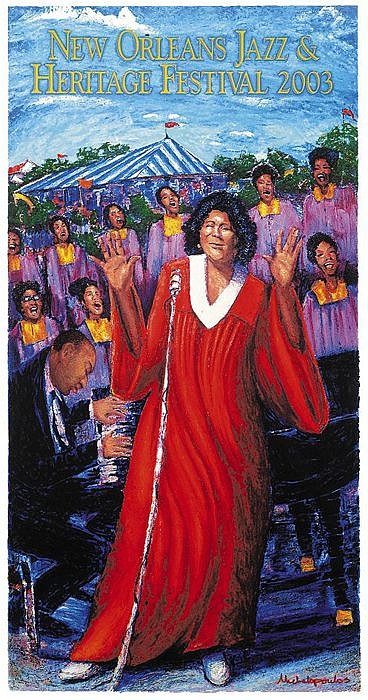 The most spiritual–and spirited–voice of the 20th century belonged to the late, great pioneering interpreter of gospel music, Mahalia Jackson. Choosing the sanctified music of the church over the temptations of R&B, this New Orleans native had a huge impact on an earthly plane: she influenced the rock & roll of Little Richard, launched the career of accompanist Billy Preston, won a Lifetime Achievement Grammy, was inducted into the Rock and Roll Hall of Fame and, against all odds, landed a gospel song on Billboard's Top 100. Her voice rang out at JFK’s inaugural and rallied the 200,000 faithful before Martin Luther King's "I Have a Dream" speech. Hers was a life of passionate commitment, accomplishment and far-reaching beneficent influence. 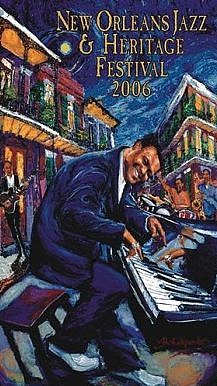 If there’s a living symbol of all that makes New Orleans great and unique, it’s Antoine “Fats” Domino. His debut million-selling 1949 single, “The Fat Man” (derived from his nickname) is considered by many to be the first rock & roll record ever. Fats went on to become the second largest-selling rock & roll star of the 50’s and early-60’s, behind only Elvis. He had 35 Top-40 singles from 1955-1963, on his way to selling more than 65 million records. 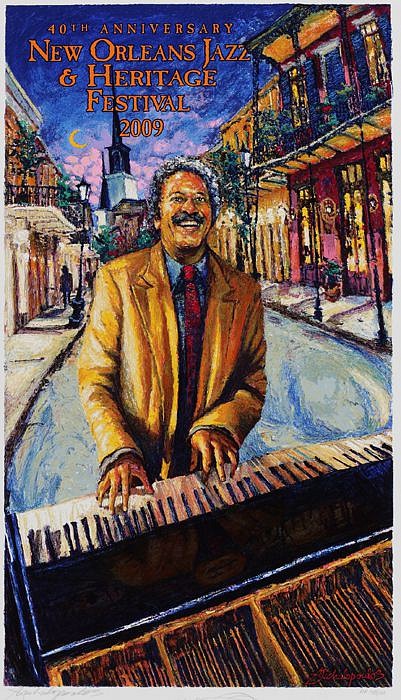 No matter how much you know about New Orleans’ music, you probably don’t know the half of Allen Toussaint’s central role in crafting and exporting the New Orleans sound from the 1960’s through today. Toussaint’s work includes songs and productions for such well-known New Orleans stars as Irma Thomas, Lee Dorsey, Ernie K-Doe, The Meters, Dr. John, and most other New Orleans singers. In addition, his nearly 800 songs have been covered by a who’s who of rock, R&B and country music: Otis Redding (Pain in My Heart), The Dave Clark Five (I Like It Like That, co-written with Chris Kenner), Boz Scaggs (What do you Want the Girl to Do?), Glen Campbell (Southern Nights), Robert Palmer (Sneakin’ Sally Through the Alley), The Pointer Sisters (Yes We Can Can) and hundreds more by The Rolling Stones, The Who, The Yardbirds, Iron Butterfly, Deco, The Judds and even The Notorious B.I.G. As a producer, Toussaint put together albums for Joe Cocker, Etta James, LaBelle, Ramsey Lewis and Elvis Costello, among many others, arranged horns for The Band on Martin Scorcese’s film The Last Waltz and for Paul Simon on There Goes Rymin’ Simon and played piano on Wing’s Rock Show, which was recorded at his own Sea-Saint Studios. He was inducted into the Rock & Roll Hall of Fame in 1998 and received the Recording Academy Trustees Award at the 2009 Grammys. 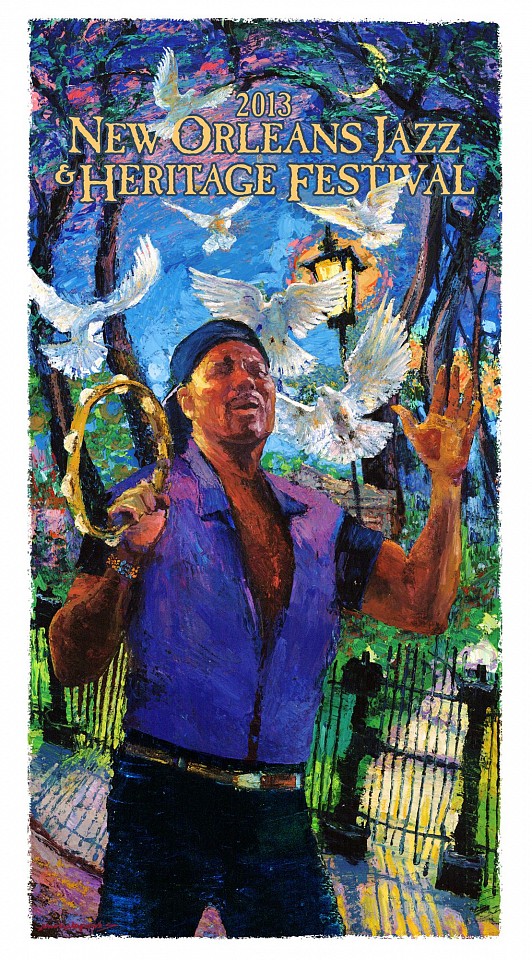